The Diner is a small restaurant that first appeared in the episode "Signals." The Man-Woman is shown working at this Diner as a waitress, where she serves food to customers. Although she has stated that her job at the Diner hasn't been working out for her, and would rather play catch all day than work at the Diner with the food. The only known food served at the Diner is a fiery salad, which the Man-Woman served to Mouse Fitzgerald and the Eye. The Diner appears to be a small white building, with a interior consisting of a long window, a table, seats, a shelve with only a static television visible, lamps and a cash register.

The Diner was also destroyed by Shark in "Eighteen", but later restored in "Prolegomenon" when Archeus appeared to fix the destroyed City after Mouse Fitzgerald was playing Pinball. 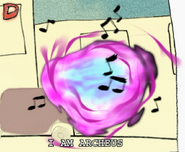 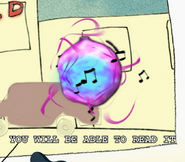