The City (or Cardboard City) is the home of all the characters in 12 Oz. Mouse inside the Q109 simulation, and one of the main settings in 12 Oz. Mouse. Other than it appearing in every episode of the series, except the webisode, though it is mentioned, and absent in a few episodes of the third season. There are two versions of the city. The first version is made out of cardboard pizza boxes and is seen being blown up in the intro And The second version is seen during the cartoon itself. The buildings aren't that colorful and they just consist of white coloring. Though, if there is text on the building, that may be colored in. There are also many places and stores in the city that the characters visit occasionally. These locations are listed below. (The list does not include homes, such as Mouse's House or Eye's Island or the New Guy's Warehouse). In "Meat Warrior", the city was given a redesign as sidewalks were added, and the design was given a lot more detail.

However, the City does get destroyed in "Eighteen" by Shark blowing up everything in his monitor room by the press of a button, and unleashing the Hovervacs and Bowtie Bots to destroy everything in the city. The City was later fixed by Archeus, and later reappears in "Invictus" as the cardboard city from the show's Intro. The city reappears again in "Francis, Cheap & Out of Control". Skillet, Buzby, Shark and Rectangular Businessman (fused into one being) are all left behind in the abandoned cardboard city in the third season.

Rhoda's Bar is featured in many episodes. Usually episodes throughout the first season. The exterior of the bar is bland, with only the words "Bar" written on the white building. Though, in intro, instead of the bar just saying bar, it says "Rhoda's" The Interior of the bar is bland, having a white background and a white countertop. Fitz and Skillet would regularly visit the bar and order 13 beers. Golden Joe or sometimes The Eye would also appear at the bar as well. After Rhoda was killed by the Rectangular Businessman in "Adventure Mouse", the shop wasn't seen as much in the series.

Peanut Cop's Jail or The Jailhouse or is just what you'd think it is, a jail. It appears in the show's intro and in the episode "Signals", where Fitz and Golden Joe bust Skillet out of jail, by swapping places. The interior is quite colorful, with the walls near the prison cells being purple and the prison bars being gray. The jailhouse isn't seen again in the series, besides the intro, after a bomb explosion.

This Bank is seen a few times during the series. Its the home of the Rectangular Businessman and it holds all of his cash. He can make it appear by simply saying "appear." The bank looks a lot different in the intro and the episode "Hired", as its design changes in the episode "Farewell" If you want to see a full description on the bank, visit the Rectangular Businessman's Bank page. The bank also appears in "Invictus" and its design changes back to its original form. The image used for it the cardboard version of the building.

Liquor's Store or Liquor's Shop is a liquor store that is heavily featured in many episodes. The shop is run by a weird-looking being named Liquor. Much like Rhoda's Bar, the store is blank looking, with a white background. Though, in the final episodes of Season 1 and the rest of Season 2, the shop becomes quite colorful, as there is blood smeared across every wall. Many major events happen in the store, such as Liquor being delivered a letter from Roostre's son, the unveiling of the second eye and many more. The shop also has a basement, which holds kegs of beer. Also, in the episode "Bowtime", Liquor smacks Roostre in the back of a head with a pipe and locks him down the basement, as he's stuck in a giant web, made by a giant spider. Liquor locked him down there due to Roostre being unaware of him possibly restarting everything. The shop does not appear in "Invictus". Though, Rhoda and Liquor make cameos in the special, as they are being contained within jars.

The Gas Station is just like a normal gas station, serving gas as a mini-mart accompanies it. The mini-mart contains other items inside, such as food and beer. In the episode "Booger Haze", it is blown up by Fitz as Skillet is filling up their Rocket-Powered Skateboard with fuel. The building is also seen being blown up in the intro. It reappears in "Meaty Dreamy" and "Invictus".

The Diner is a white diner where the Man-Woman works at, the only food served there is fiery salad, the diner's door says the words "Open To Cops".

Music Void is a Musical Store that owns instruments like guitars, drums and a black Amplifier to play music with.

750 Floor Building is a large skyscraper, and the largest building in the city, which is over 750 Floors high, and a elevator filled with green buttons.

Environment Locations Mountains: Seen In "Signals" when Fitz drove his tank to see the sun set, Desert: Seen in "Adventure Mouse", "Bowtime" and "Surgery Circus" as Fitz, Skillet, New Guy and The Eye are traveling through the terrain, Saliva Hut: a hut made of sand and spit located in desert in "Enter the Sandmouse", and an underground area is present, Forest: a large environment full of trees seen in "Spider", Spider's Cave: a giant cave where Spider lives in from "Booger Haze" and "Enjoy The Arm", Corn Dog Farm: a farm full of corndogs where Roostre lives at, Eye's Island: a small island located somewhere on the ocean where the Eye's home is located at, Graveyard: a graveyard where the gravestone of Amalochk is present.

Indoor Locations: Shark's Office: Seen in many episodes. Used as an important room to talk with the Rectangular Businessman, or the Clock on the wall. Shark's Montior Room: Used as Shark's main way to view the some of the characters in the city, Shark's Back Room: a back room/possibly a bedroom where Shark relaxes, and hangouts at, Pronto's Home: A indoor condo located elsewhere is the home of Pronto, Sewer System: an underground location where sewerage, and human waste is present, and where a Corn-Droid resides. 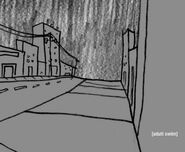