Spider's Cave is a giant desert cave where Spider lives at, in the episodes "Booger Haze" and "Enjoy the Arm." While Roostre is cocooned in webs, Roostre is taken to a desert cave, then Spider plays the piano to summon music notes to attack the corndog farm. Later on, Roostre tells Spider, "wait a minute. I know you," in an uncharacteristically serious voice.

In "Enjoy The Arm", The Spider continues to play his piano, as more and more musical notes float out of the instrument. Roostre spots a red guitar in the corner, and he asks the spider to give him the item. Once he gets the guitar, the Spider unravels his cocoon so he can play. Roostre performs a song about guns, due to him loving them. Eventually, Roostre finds out that his shack has been destroyed, Roostre convinces Spider to help him launch the corn-droid, a robot that he has built, which he claims can destroy everything.

Despite being colored white, the exterior is completely detailed, and it is a giant desert. There is a giant cave, lines can be seen on the cave, and its entrance can be seen. There's a cactus, three pieces of grass is seen, and in the background has a small volcano, a larger volcano and a group of mountains are seen. One of them has a snow top of it. The background mountains lack detail.

The cave interior is quite empty, it is colored white, the top is brown, and there are rocky spikes. There is a pile of rock in the middle of a fire glowing in the cave. There is a spider web in the middle. there is a brown chair, and Spider also owns a piano, the outside of is also seen. One scene shows a white rocky entrance to a computer with red buttons, a red controller, a screen and the top has a green effect with a corn-dog on it. 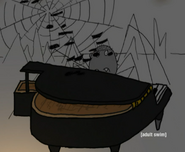 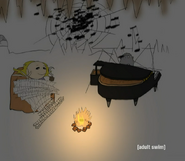 Spider's Cave placement on the map of Q109.