Shark's Monitor Room, also known as Shark's Control Room, is a white room with a monitor set that Shark uses to watch all the characters, events and locations present in the city on monitors. Shark and the Rectangular Businessman often appear this room, along with other characters such as Clock and the Eye. This room has many features such as Shark having a special rig to move around his control room, Bloody Spears, a Animal Chain, a simulation room, a button, a switch on the monitor set that reveals Shark's Jet, and a bunch of weapons behind the monitors. Shark also uses a Bug to set up all of the cameras on his monitors.

Like Liquor's Store, many major events that have occurred in this monitor room such as Pronto stealing the Animal Chain, Shark blowing up various locations throughout the city on monitors from a button, Shark's bloody death, Mouse switching minds Shark by the help of Buzby, the recreation of the Rectangular Businessman and Shark, and the voice of CJ Muff being revealed. 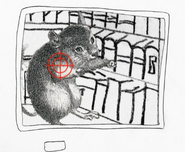 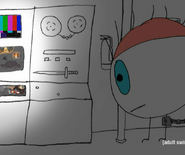 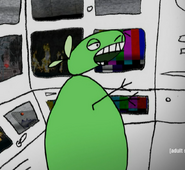 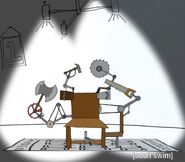