Shark's Car is a red customized car that he drives around town in the second season.

Usually, Shark and Rectangular Businessman are seen in this car, which the latter rides on a seat, that can move when Shark pressed a switch, however, the Green-Sweatered Woman did come for a ride in "Booger Haze", for a brief time until she was telepathically ripped in half by the RBM. The car first appeared in the episode "Bowtime", which was filled with urine from Golden Joe and Peanut, which signals the car's alert system. Later on, Shark finds his car filled with urine, and said that he would want to open the door but is scared to do so.

According to Shark, the red car is run by "30,000 Horsepower", and 30k HP, and he can't turn on the stereos because it would kill the RBM. The interior has a light gray interior with seats, has pink stereos, and three cassette tapes appear on the ground. Shark also uses the red car to blow up buildings with the press of a button.

The car's engine broke down in "Star Wars VII", making Shark attempting to fix it, before urine rains down the sky, and the RBM comes back, after trying to buy a Harmonica, which he didn't buy for unknown reasons.

In the episode "Enjoy the Arm", it's revealed that one of the car's seats has a rocket attached to the passenger seat, and the car's engine is filled with fish, meat, cheese, rips, ham and other objects such as a small bowling ball and oil, which the latter splatters on Shark's face, while trying to fix the car.

The car was last seen in the episode "Meaty Dreamy", and never seen again after Shark, and the RBM, drive to the Gas Station with a large gun from Shark's grandfather from the "Meat Wars."

The car also ran over a Human Citizen at one point, an another one had blood splattering onto the car's window shield after being blew up from a explosion from a building, and Shark uses his large gun to blow off the head of an another citizen's body.

A frame of a rough sketch of Shark's car interior, briefly seen in "Surgery Circus." 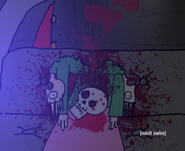 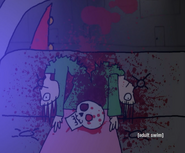 Shark and the car's engine