The Saliva Hut is a hut in the desert made out of saliva and sand. The Saliva Hut was made by Fitz and Skillet, from their own spit, and it has an underground area. This hut only appears in the episode "Enter The Sandmouse."

The exterior is a hut made of sand and saliva, there are tree trunk walls in the sand hut, it has a wooden door, a window, a tree trunk as the roof, a sand and spit chimney.

The interior in the door is pitch black, and the underground area is larger than the hut itself. The rest of the interior is fully detailed, there are no stairs, and it is colored gray. There are six rooms with three of them are on the bottom, and three other ones are the top. They include a dining room with chairs and table, a kitchen showing an oven, a cabinet and other hanging frying pans, a workplace, another room with two large cards with unusual shapes resembling human beings with black dots. Two other unknown rooms with guns and other weapons. The other one has a cardboard, a desk with a vase a fireplace with a dead scorpion on it, a machine with a red screen resembling a Nintendo Gameboy, and other details can be seen. 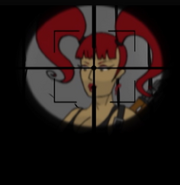