The town's bank is the home of the Rectangular Businessman. He can simply say "appear" to make the bank appear out of thin air.

Fitz and Skillet rob this bank in "Hired" as Skillet steals a bag of money from the bank, and after Mouse drives his Yellow Jet away. They also run over a statue and an explosion starts.

The Bank appears much later in "Farewell." It was used to destroy the city and it is located elsewhere next to a sea. Inside, the bank is colored gray, it has rich things like a tiger fur bed, a bearskin rug, a golden angel statue on a fountain, a bar filled with beer and bottles of alcohol, all the businessman's money, and two pictures and two gray statues of him. In the same episode, as the square arrives at the bank, the Shadowy figure suddenly appears, who seems upset.

After the two discuss their plans, the figure transforms into a black, gooey substance that is trapped in a jar by the businessman, he uses ship mode. As Fitz and the gang use Shark's Jet to fight off the Hovervacs, the top of the bank flies off as the square businessman controls it as if it were a spacecraft. Skillet tries to take down the aircraft but is unsuccessful, as the businessman shoots a ray that destroys the jet Fitz was in.

Eventually, Amalockh destroys his bank-aircraft including the businessman that was encased within the structure, although a fixed version of the bank reappears in "Francis, Cheap & Out of Control."

Cardboard box of the Rectangular Businessman's Bank in the episode, "Auraphull." 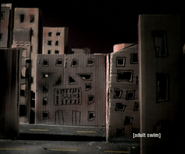 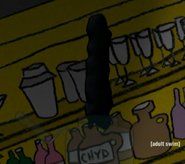 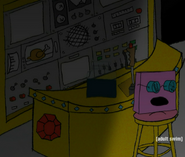 The Rectangular Businessman's Bank used a aircraft in "Farewell." 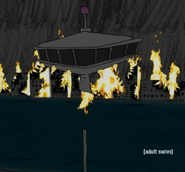 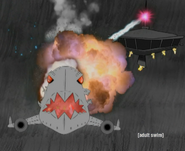