The New Guy's Warehouse is a large building that is the home of the New Guy. The building is bright blue and has two windows. This building also has one large door and a fence. The interior of the structure is colored white but holds a record player, a chandelier and the walls are covered with pictures of Skillet. The grass outside the building is green and the sky is blue. The warehouse was given a redesign in "Invictus" where the building was plain white with windows, a campfire and some script text is present on the warehouse's wall.

It was first featured in the episode titled "Rooster", where the New Guy captures Skillet and ties him up in the warehouse.

The warehouse is also seen in the beginning of the episode "Spider", along with "Spider Man Special", which is the alternate version of Spider. In both episodes, Skillet is still tied-up and the New Guy is seen sleeping on a dog-sized bed. Skillet uses his laser eyes to break through the rope that was holding him in the chair. He then jumps out the window and uses his rocket feet to blast off to Mouse's House.

The warehouse also appears on one of Shark's monitors in "Spharktasm."

The warehouse was blown up by Shark in "Eighteen."

In the "Invictus" special, Golden Joe, Roostre, Peanut Cop, Skillet and the New Guy are seen sitting around a fire in the warehouse. Sometime later, the Rectangular Businessman sent orbs, known as cronies, to take out decoys of Fitz's friends prior to the arrival of Fitz and Buzby. Although the latter stings and kidnaps the former with the Rectangular Businessman. They eventually leave the warehouse to save Mouse.

The warehouse appeared again in "Awaken", where the New Guy has a closet full of his own clothing. Other objects he has are a celling lamp, record discs and a pig record.

The warehouse was last seen in "You Made This." 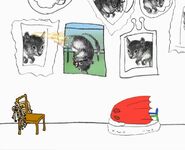