12 oz mouse Wiki
Register
Don't have an account?
Sign In
Advertisement
in: Characters, Males, Pages needing an Overhaul,
and 2 more

Mike Lazzo
The New Guy is a strange anthropomorphic red umbrella ghost-like creature with two sets of feet and a taste for lounge music. He lives in a Warehouse, He appears periodically and makes a flapping noise. He also seems to have an obsession with Skillet as his house is covered with pictures of the chinchilla. He once kidnapped Skillet, bound and gagged him and hula hooped in front of him. The New Guy often plays "Princess Cruiser" by Tongo Hiti on a record player. It seems to mesmerize or otherwise mentally incapacitate those who hear it.

The New Guy is colored red, shaped like an umbrella, three lines on him, with two legs, colored green and blue, two little stick-finger arms, and he has two yellow eyes.

The New Guy was obsessed Skillet back then considering he would follow the chinchilla around kidnapping him by torturing him with his song seen in the third episode. While his friendships with Mouse, Golden Joe, Roostre, Peanut Cop and the Eye are not really known, the New Guy was one of the many characters that help Fitz escape the simulation and he also defeated some Tie-Bots summoned by Shark and the Rectangular Businessman in the special. He also befriended Francis in "Francis, Cheap & Out of Control".

The New Guy dislikes Shark and the Rectangular Businessmen like all the other protagonists, as what's worse is that he was kidnapped by them in "Eighteen" and Shark ate him making his song appear as the insides of his moth and body. The New Guy also dislikes the Clock due to his actions in "Bowtime", though in the third season he did get a dangerous job from the Industry Man at Shyd Industries, though the job is never revealed. 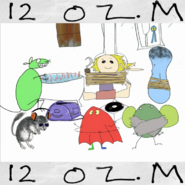