Mysterious Laboratory is an underground location present in the third season of 12 oz. Mouse. This laboratory is shown to be an underground cavern underneath Lotharganin, inhabited by Aria, Professor Wilx, and eventually Mouse Fitzgerald. This laboratory also has a monitor set, a security and defense system, an outdated prototype known as T.O.P.A.Z., alarms and blipping robots.

During the events of "Adrift", The Eye traveled on a boat through Lotharganin's oceans to this laboratory to meet up with Fitz and co. in "You Made This." The Eye also shows them some shadow puppets on a stage play. In the episode "Because They Could", Aria, Fitz and the Eye head to a room full of weapons such as various guns to take out a hoard of Bow-tie Bots.

During the events of "Reveal", "Prime Time Nursery Rhyme" and "Here We Come" respectively, Professor Wilx traps Fitz, Eye and Aria in a laser cage. He then escapes. Eventually, Golden Joe and Peanut end up in this laboratory. The latter was also killed by a bomb on the ground after freeing Fitz, Aria and Eye from the said cage by pressing a switch. 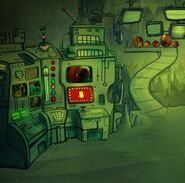 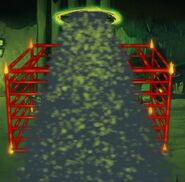 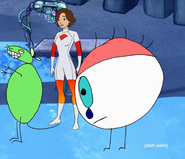 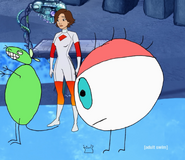