Mouse's House was the home of Mouse Fitzgerald in the first season of 12 Oz. Mouse.

His house is located elsewhere in The City, where Fitz usually does his every-day activities, the Clock teleports on the wall to stay in his house ticking, and Skillet often visits his house. The only other people have visited house were the Eye, Rhoda, Man-Woman, Shark (frozen), Spider and Pronto (who seeks into his house).

The house's exterior is never ever seen in the show (saved for the DVD release), but the interior in the daytime and nighttime is completely white and bland. Fitz sleeps on a weird bed, and has a lamp, a window, and paper on the wall.

His house is shown to have a kitchen, which is seen only in "Spider" and "Adventure Mouse" respectively, although his kitchen is shown to only have a Refrigerator containing a Cold Phone and the Hand.

Fitz and Skillet are seen playing the guitar and drum set from the Music Void in this house in the fifth episode, and watches Shark introduce Pronto to them on a television.

This house does end up being abandoned by Fitz, during the events of the second season, and later on, Shark explodes the house by pressing a button in the episode "Eighteen."

Fitz and Eye at Fitz's house in the daytime, including red camera dots. 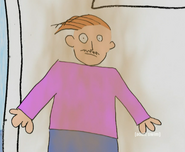 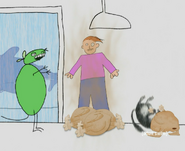 Pronto in Fitz's house, next to his Refrigerator.