Man-Woman's House is a minor location in the third season of 12 Oz. Mouse. The house itself is a home in the simulated world, which is the home of the Man-Woman, which has appeared in the episodes "You Made This", "Because They Could", "Portal to the Doorway" and "Final Beginning". It is only seen at night. The only room visible in the house is a dining room.

Aside from the Man-Woman, other people that are seen in this house are a Human Cop, Professor Wilx and Francis. They are seen visiting this house to claim the Box of Worlds she owns. Man-Woman also claims that she had a good neighbor, but went missing, who isn't seen in the show.

The house is located next to a street, and a next to grass, bushes and trees. The house's exterior is colored red, has windows, a blue door, a brown fence, two lamps, a light-post, a stone sideway, and it has flowers.

The interior is colored plain white, though only its dining room is the only room seen. The dining room is shown to have two chairs, a table, a flower pot (which has a flower that blooms), a lamp, pictures of the Man-Woman with ice-cream, with salad, her with her fist up, her face, her red ball and a large image of her with a brown horse that she rides and owns. 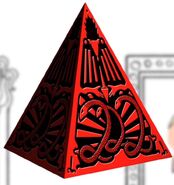 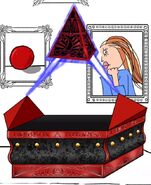 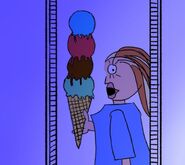 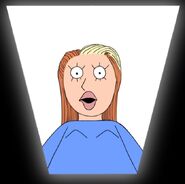