Lotharganin is an Earth-like world present in the third season of 12 Oz. Mouse. The land itself appears to be a grassland that is surrounded next to the body of an ocean. Lotharganin also has large skies, flowers, islands, a Mysterious Laboratory, where Aria and Professor Wilx inhabit, and a Stonehenge. Mouse Fitzgerald first appeared in this world in "First 12" after being sucked into the portal during the events of "Invictus." Outside of Fitz, Aria and Professor Wilx, The Eye traveled through the oceans of Lotharganin, via boat, and the Bow-Tie Bots flew to Lotharganin in "Because They Could." Eventually, Olof and Elize of the Castellica landed in Lotharganin in the episode "Portal to the Doorway." Lotharganin has also revealed to be located on an Outer Earth in the Box of Worlds. 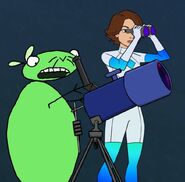 "Portal to the Doorway"[]