The laptop appears on a pile of guns, and it was used for Mouse and Liquor in the 750 Floor Building. They were playing a video game, which is called Groom Raider, which is a wedding themed video game where a you have three lives, a high-score, and is similar to a regular video game, or web game. In the gameplay, your bride chases the player while he holds a gun while a purple dressed woman throws roses at them, once the player gets a present, two knifes appear on screen with a receipt and the text is written out as "steak knife set with gift receipt!". It will then flash onscreen if the game is not played.

The laptop was really used for a Gamma Photon X-Ray file to find the Hand inside the Producer Man's brain, and start some communication with it. The home screen of the laptop is a photo-shopped image of women. The laptop has a hard-drive, and several files on it. 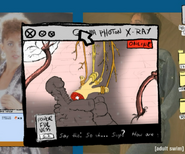 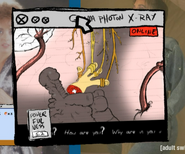 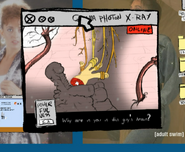