Max Simonet
Industry Man, also known as the Clock, is a shapeshifting character featured throughout the entirety of 12 Oz. Mouse. While managing Shyd Industries, he employed two scientists to assist in the development of a box that contains universes upon universes within it. However, he would later trap the aforementioned scientists and other workers inside the worlds, and eventually lays out a plan to destroy the box entirely.

Due to his shapeshifting abilities, he, at first, transformed into a crudely drawn clock and observed the townsfolk of Q109. Later, in Season 3, he would switch into a human-like character, and devise a plan to ultimately destroy the box, killing everything and everyone within it.

In his Clock-form, the Industry Man is presented as a circular clock with two hands indicating the time, which is always depicted as 2:22. His clock appearance seems to be poorly designed, as his detail suggests the object was drawn by a black crayon.

In his Human-form, the Industry Man appears as an ordinary man, having blue hair, a pointy nose, and square-like eyes. He wears a grey suit with a purple tie and has a somewhat charismatic demeanor, despite being the most malicious character in the series.

Shark and the Rectangular Businessman are one of the few characters who are allies of the Industry Man, working with him to ensure nobody else escapes, besides Shark and the square-being. The Industry Man has also befriended Professor Wilx, but kills the latter in "Here We Come."

While the Industry Man wants to demolish the box and the many worlds within it, most characters trapped inside these universes desperately want to escape. Main characters including Mouse Fitzgerald, Aria, Liquor, Golden Joe, and many others enact plans to depart from this nonsensical world of theirs, and it can be assumed that the Industry Man is most likely annoyed by them, constantly thwarting his plans and desires to destroy the box of worlds.

As stated before, the Industry Man can transform into a crudely-drawn clock and a human-like being. It is currently unknown whether he possesses the capability of changing into another creature or being of some sort. 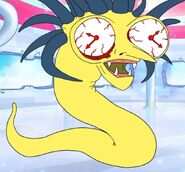