Other humans that are citizens of the city and the simulation include the Man-Woman, Producer Man, Green-Sweatered Woman, Roostre, others include a citizen named Buttermilk, a construction man, and a group of mothers of babies (though no babies are seen, referred to something else) and Lee.

Every human citizen are all adult male with some exceptions, such as the mothers of babies are females, which are rare, since the female individuals themselves, which only shown up once.

Most of the jobs of the citizens are unknown, except the Construction Man, some work for Shark and the Rectangular Businessman and its implied that one works at the Gas Station.

Although all of the citizens are adults, its implied in "Meat Warrior" that the mothers have babies (which are something else) and in the real world there are four children riding on bikes at the beginning of "Invictus".

A construction man appears in the episode "Meat Warrior" working on and fixing a utility pole, but as Peanut fires his gun at the electric wires, he is then zapped, and is killed by the wiring, resulting in his skeleton remains wearing a single construction hat trapped on the pole.

A bunch of Mothers of Babies are also seen in "Meat Warrior". The mothers are seen carrying baby carriages/strollers, but as Peanut and Liquor drive the firetruck around the city's streets, the mothers fall, and the strollers drive away, making the mothers yell out "my baby!", and one particular carriage is hit, and flew away in the sky, and later on, crashes onto the streets, where a mother claims its her "baby", where red liquid pours out of the stroller, however the red liquid from the stroller is not actually blood, its red wine from bottles of it, which the mother refer to as their "babies." These are the only notable citizens that are female, though despite their names, they're not actual mothers of babies, but instead have wine bottles as their babies.

The Human Citizens have a basic character design, all the human citizens, and Buttermilk are palette swaps, except the episode "Meat Warrior". They have shirts, pants, shoes, hair, eyes, and having no noses or ears. They have the skin colors: an normal Caucasian or are dark-skinned. The shirts are usually brown, green, white, pink and sometimes orange, the pants are usually lime green, blue and pale. Their hair is usually brown, gray and black, and the shoes are colored black, brown and purple.

The Construction Man and Mother of Babies seen in the episode "Meat Warrior" are a lot more detailed. The Construction Man is colored blue, has orange pants and has a yellow hat on. The Mother of Babies have dotted eyes, orange, black and brown hair, different colors of shoes, their dresses are brown, lime green, blue, brown, gray and white. The four children riding on bikes look a little different from most of the humans.

The Human Citizens with strange helmets on their heads 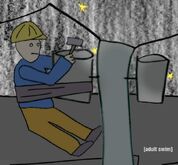 Construction Man's skeleton after being zapped by a utility pole

Baby carriage of the bottle of red liquid