12 oz mouse Wiki
Register
Don't have an account?
Sign In
Advertisement
in: Characters, Pages needing an Overhaul, Females,
and 3 more

Melissa Warrenburg
The Green-Sweatered Woman is an annoying woman that lives in the city, This character's actual name is unknown only referred to Green Sweatered Woman (later named: Cyber Green-Sweatered Woman when she becomes a terminator). She appears as a blonde-haired woman wearing a green blouse, shoes and a pink skirt. She speaks in an annoying, repetitive manner, often telling other characters what they're not allowed to do. This has resulted in her getting shot on at least two occasions. Later after getting ripped in half, She is revived as a cyborg by Fitz and Skillet in order to be their walking arsenal, carrying many firearms from Roostre's weapons cache. In cyborg form, she joins Fitz and Skillet in gunfights and helped to kill Shark.

In the third season, the woman appears in the real world in a monitor room somehow, and seems to be working with The Castellica and calls them on a red phone in "Here We Come". She is referred as "Melissa", in reference to the name of her voice actor. She is also most likely working with Sirus to take down Shyd Industries.

The Green-Sweatered Woman resembles the Man-Woman, though she has blonde hair, green blouse, and a pink skirt, her head has a small circle eye, a nose and a mouth, has two legs, but unlike the Man-Woman, she has shoes on her feet, which are colored green. Her terminator form has two large gray guns, the left has a lot of gun parts, the right has three gun parts on it, as arms, her head is a skull with, three purple spikes on it, a cybernetic neck, the top of her blouse is ripped and her legs are still intact with two guns as feet.

She seems to have allied with Mouse Fitzgerald and Skillet after she was revived as a cyborg and a Terminator, helping in several gunfights against Shark's minions. He also allies with Sirus, Elize Ryd and Olof Mörck in the third season.

She is often shown nagging on several characters such as Mouse, Skillet, Peanut Cop, Golden Joe and a few Human Citizens on telling them on what they're not allowed do. She also dislike both Shark and Rectangular Businessman most likely due to their evil behaviors with the latter telepathically slicing her in-half, and she does eventually gunned down Shark along with Mouse and Skillet in the nineteenth episode and the Rectangular Businessman in the special. In gunfights with Mouse and Skillet she killed both the Bowtie Bots and Hovervacs. 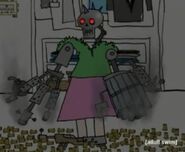