Picking up from the "Invictus" episode, after entering the portal, Fitz and his friends are scattered to different worlds. Mouse finds himself without memory and in a new world called Lotharganin where he meets Aria and Professor Wilx; two top scientists from the Outer Earth who worked with Shyd Industries, but are trying to escape to Outer Earth. Golden Joe performs in concert with Kiki, his DJ. Joe is then abducted and locked in a room with Peanut Cop under the surveillance of pineapple guards. Roostre is trapped in the World of Muck. Buzby hears a radio transmission sent by Muff from Q109.

"It's 7 AM on the Coast! I'm your host with the most - Muff here from Q109. It's time to get your productive ass out of bed, and earn some taxes. Hey, I gotta tell you about this bizarre dream I had last night. I'm in bed and all of a sudden, this shark bursts through my door. And I'm like 'Hey, man! What's a shark doing bursting through my door? I'm Muff, I'm trying to sleep. I don't need a shark in my bedroom doing it!' Haha..." 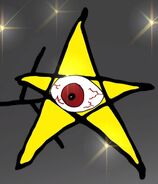