Nick Ingkatanuwat
The Eye is a giant eyeball that speaks in a calm, almost monotone pace but emphasizes on words and letters that sound similar to "eye". He lives on an island which, he claims is in either Iowa (Eye-owa) or Wyoming (W-eye-oming). He also has the ability to tap dance, as this is seen in "Booger Haze" and "Auraphull." In Q109, his form is a eyeball of a human being in a simulation.

The Eye has a very simple design, he has a big circle, with a pink eyelid, eyelashes, the eye is colored blue, a black circle in the circle of it, a mouth and two stick-figure legs.

The Eye is one of the friendliest residents living in the cardboard city, being friends with pretty much anyone like Mouse Fitzgerald, Skillet (sometimes), Liquor, New Guy, Aria, etc, with Mouse becoming friends with the giant eyeball, in fact eventually he reunites with Fitz in the third season. Before the Second Eye turned evil, the Eye befriended the clone, repeat and said various lines and tap dance together.

On a normal basis, the Eye doesn't normally dislike people, though Shark and the RBM did punish him and as forced to get one of his legs chop off by Bloody Spears, with him and the Second Eye which he grew a arm and pulled out a gun and the evil eye moved the friendly Eye out of the Liquor Store onto the streets to one of Shark's buildings offscreen, his leg was in a shackle to a pipe as he was trapped while Shark was doing his bad deeds such as using the Clock's time-gas, abusing him and exploding buildings.

Rhoda talking to the Eye

Eye after getting his leg cut off 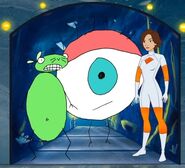 The Eye dressed as a knight and holding a sword 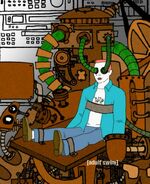 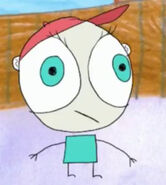