Because They Could
Desert Monster is a fanged creature that appeared in the desert in "Because They Could." This creature is first seen when The Kid tells Roostre to duck as the former uses eyeball-like weapon to fire a beam. This beam kills a nearby monster that suddenly appears, and roars at them, leaving only its corpse and heart. After that, the creature's heart suddenly grows bat-like wings and flies away. 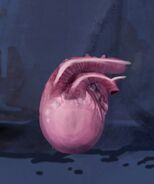