The Desert is a recurring barren landscape that appears in many episodes of the series. It usually features many cacti and sometimes other aspects of nature.

The Desert is first seen in the seventh episode titled "Adventure Mouse", where Fitz and Skillet ride through the landscape on the Rocket-Powered Skateboard, as they have a knocked-out New Guy onboard as well. Fitz and the gang are planning to arrive at Shark's Party. While they are doing so, a Hovervac floats above them.

In "Bowtime", while at Shark's party, the Eye gets his leg cut off by the Hand, due to him offending Shark. Later in the episode, while rescuing Skillet and the New Guy, Fitz grabs the unconcious Eye and they all break through a window and head into the desert. They all use the Rocket-Powered Skateboard for transportation again.

In "Surgery Circus", Fitz, Skillet, The Eye and New Guy are still riding through the desert, as their skateboard has run out of gas. The New Guy carries the skateboard and the rest of the gang on top of his head as they try to arrive at Liquor's Shop so they can successfully re-attach Eye's severed leg.

In "Meaty Dreamy", the Man-Woman admires a flower in the desert, as Shark, whose face is on the moon, repeatedly tells her to eat it. She eventually does, which gives her the ability to transform between a man and a woman. The Fire Breathing Snake also appears as the creature breathes flames into the air.

The Desert is seen again in "Eighteen" when the ground bursts and cracks, hoards of Hovervacs fly out of the ground.

In the first webisode titled "Enter The Sandmouse" Fitz, Skillet, Golden Joe and Peanut Cop track through the desert as they leave their city behind. During the journey, Golden Joe is taken away by a hawk and Peanut Cop vanishes in a strange flash of light. Fitz and Skillet are the only survivors left and they head farther into the desert. Fitz and Skillet come upon another desert, as they see unusual events happening. Such as an insect being sucked into the ground and robotic arms breaking out of a cactus to twist apart a bird, which the latter turns into a hopping bird spider-like creature. Even though they see these weird happenings, they decide to live their, as they build a hut out of saliva, and eventually encounter a gun-toting woman named Lee.

In the third season of the show, a different desert is shown, as this one has a realistic landscape with blue ground, and some cacti appear. It is located above The World of Muck. The Kid is lives here in a tent, has a campfire and has a collection of guns. Roostre comes out of the mucky land to encounter the Kid. The only creatures seen in this wasteland are a dead centipede on the Kid's wooden stick, and a Desert Monster that the Kid kills with a eyeball gun. Sometime later, Roostre is teleported by Sirus, and then much later, he jumps back to the desert, eventually Mouse Fitzgerald and his allies are later teleported here by a thunderstorm. The Kid arms them with his futuristic weapons, including his own gun store. 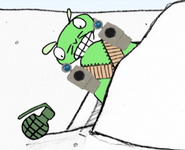 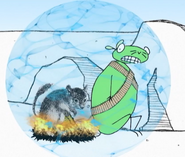 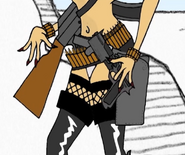