The Corndog Ship is a giant rocket ship in Roostre's Basement, which shaped like a giant corndog. The ship was presumably built by Roostre. The corndog ship has little corndog shaped missiles, and has an opening to an engine to control.

Fitz discovers the rocket in "Star Wars VII", and Skillet starts to gather tons of weapons such as guns, grenades, and bombs to place inside the shuttle. After they've loaded the ship up with weapons then blast away in the ship, after Mouse throws a cigarette into the pile of bombs that are still left in the shack. As they escape, the explosion from the bombs destroys Roostre's home, going to space.

In "Enjoy The Arm", Fitz, and Skillet are floating in space, as they are riding in their corndog ship. As they are looking down on their planet, they spot a "real city". After this, the ship runs out of gas, sending them crashing into the 750th floor of a large skyscraper.

The corndog ship makes one final appearance in the same episode, as the destroyed ship is seen through the wall when Fitz and Skillet find the Green Sweatered Woman, as she is ripped in half. After that, the ship is never seen again. 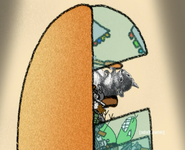 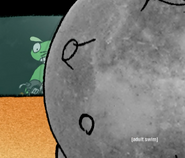