Bowtime is the eighth episode of 12 Oz. Mouse. It was the first episode of Season 2. The episode aired on September 24, 2006.

The episode begins as Peanut Cop, Golden Joe and Roostre are still stuck inside Mouse's jet. Though, Joe and Peanut use their urine from their blurred dicks to bust through the window of the jet car. Their plan works, and they continue peeing everywhere. Such as onto trash cans, Shark's car, and Joe even writes his name in urine on a wall, which says - "Golden Joseph." The screen cuts to the interior of Shark's building where Shark's party is still going strong. Liquor begins talking to the Man-Woman. She responds to Liquor's attempt to start a conversation by saying "Stop your stop talk. I'm trying to --" Liquor cuts her off by saying that she isn't reading, due to him knowing what she was going to say next. Liquor asks her "What's behind the case, or are you to scared to tell me?" She harshly says "Make me", which makes angrily Liquor grab her and throw her against the shelf. The camera pans over to the bookcase, revealing what's behind it. It appears that Fitz is inside his home, with his wife giving him a peppermint bowtie for a gift. His wife tells him that the bowtie needs to make contact with his flesh, which makes Fitz feel uncomfortable. The wife demands that he puts on the tie. Fitz holds the necktie up to his face, when the tie's arms pop out. He throws the tie onto his wife, which makes her warp away, revealing that she was a hologram of some sort. Fitz uses his gun to destroy the robot, but this fails, ultimately allowing the robot to multiply. Eventually, one of the bots makes contact with his flesh and it soon drills a hole through him. After Fitz has died, it is revealed that this was all a simulation controlled by Shark. Meaning the house, Fitz's wife and the robots were not real. Which means Fitz didn't actually end up dying. The camera pans into Shark's control room where it is shown that Skillet is tied up and gagged. The screen cuts back to the party, where Roostre and Golden Joe enter. They both agree that the party is lame. Peanut Cop is shown laying face down in the punch bowl, with the Green-Sweatered woman annoying him. Liquor approaches Roostre, while other people attending the party, including Golden Joe, are stealing items such as Shark's trophy, beer tubs and beer ice buckets. Liquor shows Roostre the letter he was given and after this, Liquor says "There's something I have to show you right now." They both head to Liquor's shop, where he leads Roostre to the basement. Liquor stands behind him and hits him in the head with a pipe. The next scene is of the Producer Man entering Shark's Backroom, only to find the Rectangular Businessman hanging on the wall with arrows pierced through him. Eventually, the Producer's Man head is sliced off once again as Shark says "Where's the Zinger? We all love to laugh!" The camera cuts back to Liquor's Basement, where Roostre is caught in a web and Liquor tells him "You come too close to restarting everything. You'll set the alarm." Roostre is confused by this, as the shadow of a Spider is shown. Skillet is shown, still tied up and with the Clock moving towards him. Thankfully, the New Guy appears and covers the clock inside of his umbrella body. While its covered, the Clock releases time gas, which makes the New Guy inflate like a balloon, making sure none of it leaks out. As soon as this happens, Mouse jumps through the window to the control room and Skillet uses his laser eyes to tear through his rope. Mouse grabs the New Guy and eventually the motionless Eye, with Skillet following behind him. They all jump out the window and escape into the desert. As they are escaping, Shark and the Rectangular Businessman are watching them on a television screen. The Businessman asks Shark if this is the end, which Shark replies with "It's never the end". Soon after, Shark asks Pronto, who appears in front of him, to "take him out, for real this time." The Shark and Square continue watching the gang run into the desert.

After the credits, Shark goes outside to his custom car, but finds it full of urine from the Peanut Cop and Golden Joe, saying that "I kinda want to open the door, but I'm scared to." 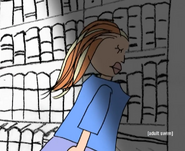 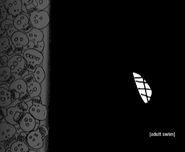 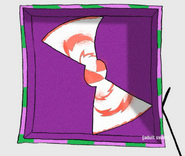 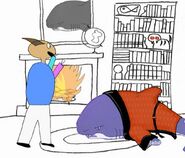