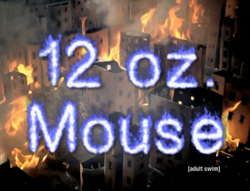 The 12 Oz. Mouse intro theme is featured in each episode throughout seasons 1 and 2, accompanied by the cardboard city title sequence. Though, the theme was ultimately cut for Season 3, as title sequences were removed altogether, and the end credits showcased Swedish heavy-metal band, Amaranthe's take on the song. The original theme was composed by hardcore American rock-band, Nine Pound Hammer, with a member, Scott Luallen, voicing Roostre in the series.

I'll blow your ass away, like a ring of a bell,

"Pedal to the floor, and the whiskeys flowin',

I got a porn-shoot, I gotta get goin',

You don't understand, you don't give a damn!

Jet car's rollin' all night long, crankin' up the jams and singing along,