The 12 Oz. Mouse Movie DVD was released in 2008 and was featured on the Adult Swim shop. The first disc contains every episode, with the exception of Auraphull, compacted together to create a movie, with the second disc including extras such as production footage, fan art and more. The cover of the DVD shows the whole crew sitting together at a large table, spoofing the painting created by Leonardo da Vinci titled "The Last Supper." When the Adult Swim shop closed its "digital doors" in 2012, the DVD was no longer being sold. Since then, copies of the DVD have been floating around the web, usually having a hefty price tag, due to both discs being extremely rare. 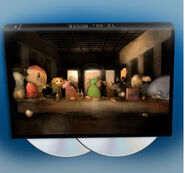 The DVD's cover spoofing the Last Supper with the 12 oz. Mouse characters replacing Jesus Christ and the twelve apostles on it.

12 Oz. Mouse - The Making of "You're Scaring Me"-2
12 Oz. Mouse
Community content is available under CC-BY-SA unless otherwise noted.
Advertisement